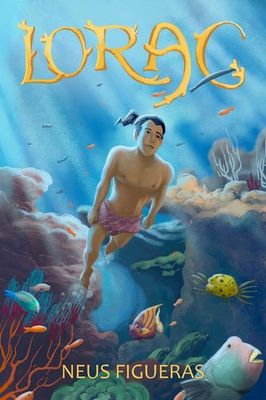 From a marine scientist and writer, Lorac is the story of a young man making his way in the sea and in the readers’ hearts to protect our planet.

AVAILABLE HERE
SYNOPSIS
Lorac didn’t set out to be the voice of the ocean, but when the future is at stake, being a hero is the only choice.

Lorac, the youngest of a family of sea nomads, suffers a series of unfortunate events and has to seek refuge in the heart of the sea.

The transition isn’t easy, and unexpected difficulties arise. But helped by his new friend Zoe, Lorac joins a family of centenarian creatures and discovers the secrets of the coral reef―his real home.

A threat that affects the marine world, however, makes him depart to the place he once knew and now knows no more, in a daring mission to save the ocean―and the planet.

Lorac will have to make difficult decisions, live in worlds where he doesn’t belong, and prove his worth for the good of all. Science and fantasy come together in an adventure of hope and courage that transmits an important message to protect our environment.

Read an excerpt
“A good friend taught me that you can only fail if you do nothing.”